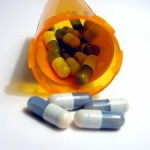 Expiration dates on medications both over the counter and prescription are a great cause of confusion in my private medical practice . It is a rare week when nobody asks me about this issue . Expiration dates will certainly become a critical issue for prepper’s as they rely on older and outdated meds that they have either stockpiled, traded or scavenged. First of all you need to understand why expiration dates are printed on products.

An expiration date is the final day that the manufacturer guarantees the full potency and safety of a medication. U.S. pharmaceutical manufacturers are required by law to place expiration dates on all prescriptions prior to selling them. This basically gives the drug companies some legal cover so they do not have to guarantee the safety of their products past the date stamped on them. Most U.S. pharmaceutical companies print expiration dates from one to five years after their drugs production .The official party line of the FDA is that once the drugs container is opened then all bets are off and the expiration dates can no longer be relied upon , that is a load of crap. The subject gets further muddled by the use of ” beyond -use” dates often printed on pill bottles.Sometimes these are worded as “discard after ” or ” Do not use after ” , this wording on bottles is required by individual states Board of Pharmacy. To make matters worse these dates are usually one year after the production date , giving consumers the notion that these meds are no longer viable or potent , nothing could be further from the truth. Those warnings are best ignored totally , they are totally worthless.

One of the largest consumers of prescription and over the counter medications is the U. S. government , especially the military. They were in a bind , they were throwing away millions of prescriptions each year because of expiration dates , presuming they were no longer potent , so they decided to fund a study to see if that was indeed true. The FDA did the study for the Department of Defense and it was known as the Shelf Life Extension Program (SLEP) . The study was a resounding success , as far as disproving the expiration dates. On average the drugs tested were potent from 5 to 15 years after their stamped expiration dates! Now , there were exceptions to this rule such as nitroglycerin, insulin, tetracycline and liquid antibiotics , these expired faster than the others .

In general I like to use the rule of thumb that liquid preparations do not last as long as solid pills or capsules . One sign that a liquid medication might be compromised is if it looks cloudy or discolored or it is forming a precipitant . What in God’s name is a precipitant you ask? Think of when you were a kid and you made yourself a glass of Kool-Aid . You took a full glass of water and emptied the packet of Kool-Aid into it and stirred the mixture, what happened? The Kool-Aid dissolved completely , now if you took the same packet and mixed it in half a glass of water , what happened? Then you see the Kool-Aid come out of solution ( since it is over saturated) and begin to collect in the bottom of the glass, that is a precipitant.

Some exceptions to the rule are products such as EpiPen’s , the epinephrine rapidly loses its potency rapidly and usually is not viable after its expiration. Other exceptions include all types of Insulin , nitroglycerin tablets, liquid antibiotics and vaccines.

So , in summary I like to use the general rule of thumb that solid medications such as pills and capsules are good for at least ten years after their expiration dates and probably for a lot more , maybe even closer to fifteen years . For liquids it is about five years , although may be less if you see them cloudy ,discolored or with a precipitant . However , if we find ourselves in a SHTF scenario and are desperate , then you will just have to experiment and see if the expired med’s you have found are still potent or not , once again necessity becomes the mother of invention.

The Truth about Expired Medications

This disclaimer provides that such medical information is merely information – not advice. If users need medical advice, they should consult a doctor or other appropriate medical professional.

About the author: Ralph LaGuardia MD

No comments added yet.